The 8 Series: The Most Beautiful BMW Ever Produced. 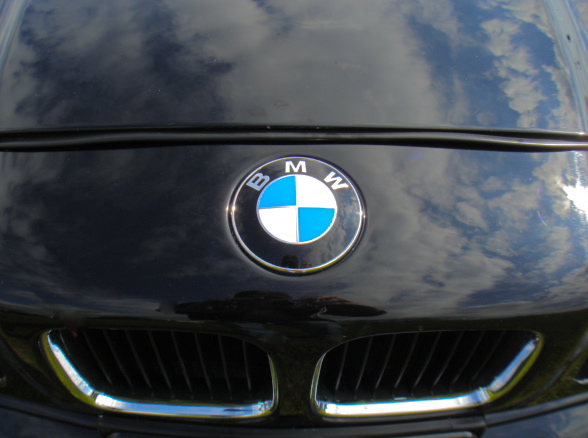 For the entire 80's decade, BMW's 6 Series epitomized the pinnacle of styling and elegance in a personal luxury coupe. The crisp lines and perfect proportions of the design earned it a home in the permanent collection of the Museum Of Modern Art. Production ended with the 1989 Model, available as the 635csi in automatic and 5 speed manual ended production in April 1989 with only 650 units made for the USA. Total production in 14 years of the 6 Series was about 86,000 units worldwide

The luxury version with hand-stitched Italian glove leather throughout the cabin, designated the L6, and the M6 a hand-built variant designed for performance driving, were only available for 1987 and 1988. Prices ranged from about $40k to $50k. 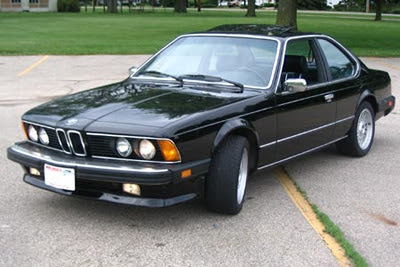 A successor to the 6 Series was anxiously awaited by the faithful, with spy photos and news leaks starting with development of the new model on 1986. What BMW did not communicate well to the public was that the E31 8 Series was intended as a new model featuring state of the art and break-though technologies, designed to push BMW further up-market. 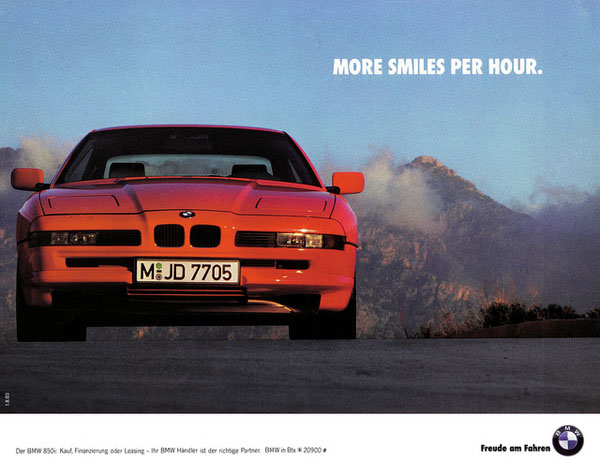 BMW spent an extraordinary amount of time and money on the E31 development. Over $1 Billion US had been invested before a single example rolled out of the factory.

Arriving in the US in 1990 as a 1991 model, the enthusiastic reaction to the stunning exterior styling was immediately followed by a gulp when potential buyers learned the MSRP was literally twice the price of the 6 Series. While BMW had brought to market " a Ferrari you could drive every day", they also left a void in their product offering for a 2 door coupe as wide as the Grand Canyon: BMW did not offer a 2 door coupe between the $30k 3 Series and the 850i, introduced at an eye-popping $90k+

With a computer-aided body created to achieve a .29 drag coefficient and styling overseen by an Italian head of styling, the BMW 850i 12 cylinder was the first production car to utilize
" drive by wire " technology eliminating the mechanical connection between gas pedal and engine speed; seat structure was reinforced to incorporate the driver and passenger seat belts, allowing designers to eliminate the B-Pillar and ( with the exception of the Mercedes SEC ), create the first hardtop coupe seen since the 1970's. Initial years featured a very sophisticated multi-link rear suspension.

Initially only one model was available in 4 speed automatic or 6 speed manual. Both were motivated by a V12 - basically two in-line 6 cylinder engines mated together with a output of just shy of 300HP. A rare 396 HP 850csi would appear with an M engine.


The 850csi Test Drive Profile From the UK

Unfortunately for BMW, the 8 Series introduction was inconveniently timed with a world-wide recession, spiking gas prices, and a war in the Gulf. Add then there was the price. Once gas-guzzler taxes, state sales taxes and dmv registration were added, this was a $100k car.
Buyers hoping to replace their 6 Series walked across the street to Mercedes and the new kids on the block, Lexus and Infiniti - or just decided the 5 Series was more appropriate.

US sales were so disappointing, BMW decided to amortize the development costs by introducing a lower-priced 8 cylinder version in 1994 - the 840ci. Except for having round
quad exhaust pipes, the cars were visually identical. 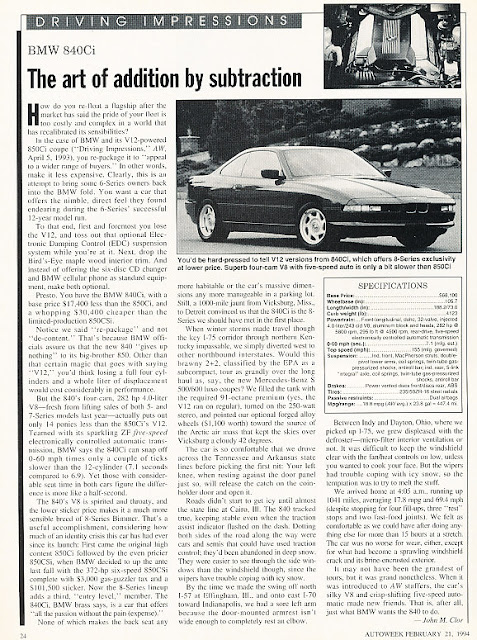 In many respects, the 840ci was actually the better car, as agreed by Autoweek in the article above.  With less than a 10Hp difference between the 8 and 12 cylinder cars, buyers had difficulty justifying paying $30k more for the 850. The lighter weight of the 8 cylinder also made the car feel more nimble, and average gas mileage could be almost twice as good in regular driving, achieving close to 25 mpg highway. Oddly, the exhaust note of the 840ci also sounded better, giving off a throaty powerful rumble as opposed to the 12 cylinder's silky smooth and subtle operation. 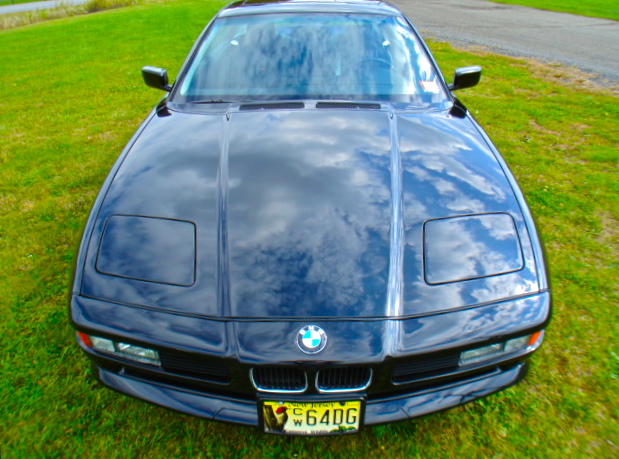 Worldwide, about 30,000 E31's in all configurations were assembled, making BMW's development costs PER VEHICLE nearly $35,000 before the first part was assembled.
This was one-third the number of 6 Series sold.

Despite it's sales failure, the 8 Series remains extremely popular among those fortunate to own them, and many consider it to be the most beautiful BMW ever produced. 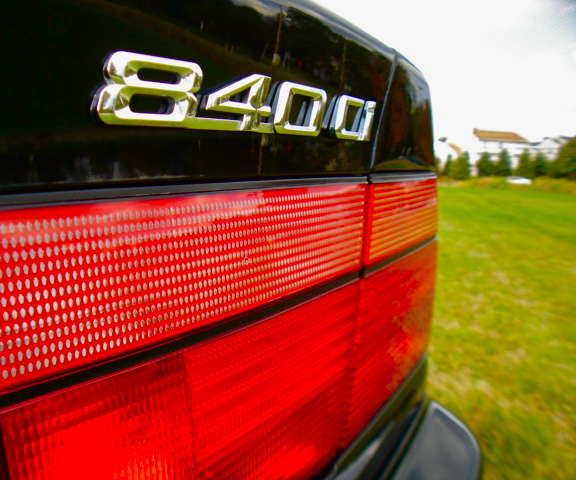 This 1994 BMW 840ci is finished in original factory Schwartz Black with Black Leather Interior and optional Directional Sport Alloy Wheels. A two-owner car currently with 80,000 miles, it remains in my personal collection; my car of choice when taking a 100 mile+ drive.

Thinking of Buying An 8 Series?

Owning an e31 8 Series affords admission to a very exclusive club. While seen regularly in California, they are extremely rare throughout the rest of the US. In the 3 years I have owned this 840ci, I have not passed another 8 Series on the road. My local BMW dealer had NEVER seen one.

Having owned both the 12 cylinder 850i and the 840ci above, I would highly recommend the 840ci as the overall better choice- unless you want a manual 6 speed. The cars are visually identical, the horsepower and performance in real-world driving is about the same, and the gas mileage is great for a 300 HP V8 at 17- 25. More importantly, engine components are shared with the 5 and 7 Series of the era, so far less costly than the V12 - which seems to have two of everything.

Trim and cosmetic parts are VERY expensive with most requiring air freighting from Germany. Most BMW dealers have little to no experience working on these cars outside of California, so finding a knowledgeable mechanic is crucial.

Proper adjustment of the windows is important re: wind noise, water intrusion and simply to keep them from not breaking. A common and annoying problem related the General Module causes the door locks, wipers, courtesy locks and trunk to stop operating below approx 40 degrees F. The problem this really creates is that the windows - which seal into the roof channel - will not drop, and therefore you will not be able to get into the car.

Because of the EXTREME limited production pay up at acquisition and buy the best example you can find. It will save you thousands of dollars.

Posted by TheClassicCarFactory.com at 3:58 PM