The Dumbing Down of The Lincoln MKT

This is the car luxury buyers have been waiting for
that could have saved Lincoln.

How Did A Gorgeous Concept Tourer Degenerate Into A Taxi Cab? 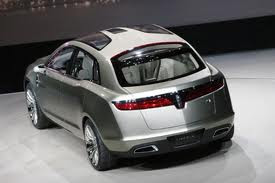 The Lincoln Motor Car Company - as it now prefers to call itself - has a rich history and heritage of producing high-quality, beautiful luxury automobiles. The 1940's Convertibles, The 1950's elegant Mark II, the iconic 1960's 4 door center-pillared sedans and convertibles and the Mark III are prized by auto enthusiasts and collectors. Each of these models are examples of what a Lincoln should be: classic lines, rich materials and high build quality.
All that ended about 1971.

Now 40 years later, Detroit is in resurgence and Cadillac is now on the shopping list of those who exclusively bought Mercedes, BMW's and Audi's. The Lincoln Motor Car Company is not.

Although Ford did not partake in the US government bailout, their sacrifice to the Car Gods on the altar of corporate downsizing was the closing of The Mercury Division - traditionally just up-market of Ford's offerings. Some now believe that what Ford really did was secretly close Lincoln instead- and put the brand's nameplate on what would have normally been Mercury vehicles. 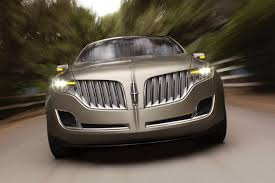 The Lincoln MKT Concept by any measure is a unique and inspiring automobile. Gorgeous lines with a road-hugging stance and a commanding presence, this 4 place Grand Tourer promised to combine the best of luxury sedans with the utility of an estate car. For the first time in many years, here was a car that LOOKED like a Lincoln - and whatever it was going to cost - it would be a bargain. Both public and press reviews were sensational and production was promised.

Finally - HERE was the car that could resurrect Lincoln. Marketed correctly, Lincoln could create a brand new tourer market niche and they would own it. Production was promised. Then came the actual production version of the car. They blew it.

Have a look at these side by side comparison photos of the Concept Vs. What We Got. 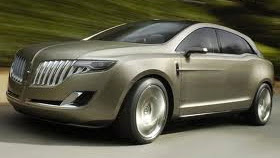 The Concept's Crisp Belt line kicks up in Coke-Bottle fashion beginning in the center of the rear door as an undefined wheel arch fills in the quarter panel; A distinctive logo vent of the front fender is bisected by a sharp accent crease on an otherwise clean slab design. The body widens then wraps under with a dark accented rocker; The space between the sharp belt line edge and the windows is near flat, creating a tucked-in cabin compartment, continuing flat into the hood so that the hood center raises in order to meet the A Pillar. Wheel arch openings flair ever-so-slightly near the bottom with  fenders widening to meet the singular accent crease. 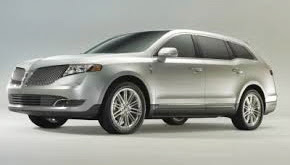 GONE: The hunkered-down overall look, the sharp belt line crease is diminished; the kickup is minimized into the rear quarter panel, the wheel arches no longer flair and fenders no longer exhibit the bulge; The center of gravity moves UP to the widest point at the door handles; the belt line crease peters out at the A Pillar resulting in a higher overall hood. Seemingly everything crisp has been softened or eliminated.

Note the MUCH shorter front and rear overhangs, lower roof line height of the Concept (Left);
The Concept's Muscular rear flank transform In production to  " Baby Got Back " 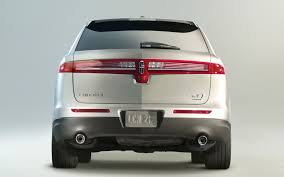 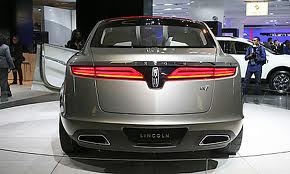 Here's where things really go bad...the Concept (Left) roof line ends a good measure ahead of the tail fascia, creating a trunk ledge that slopes down; the tail itself exhibits a curvature accented by a crisp saucer-lip below the tailgate. Two neon gas taillights with red brake and yellow turn Indicator tubes are trimmed in chrome at the top inset with the brand name. Below the crease resides two large exhaust ports, with the body color wrapping to enclose them in a dark accent trim. The taillights end at the vertical side creases of the rear quarter panel.

(Right) The production model looses the distinctive trunk lid completely and exhibits a much higher center of gravity; GONE are the cool taillights in favor of a cheap un-trimmed full-width lamp that wraps around into the quarter panel, as the vertical side creases have been eliminated. The sharp lip near the bottom has been transformed from element to accent; note that the side pillars no longer meet a fender shelf at the belt line as the hatch opening  has been widened. All vestiges of the muscular look have vanished from the rear, making these two different cars entirely. 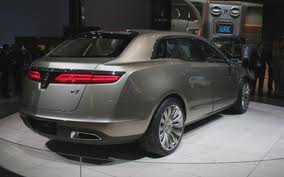 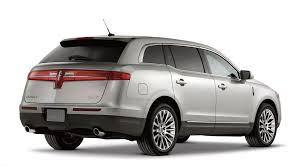 From this angle it is clear how much changed. The rear deck and rear fender ledge have been eliminated; the sedan-like C Pillar has been moved back and narrowed; The vertical sloping creases defining the rear quarter panels are missing and the sensuous flow of the wheel arches has been sacrificed for a flat panel. Grand Tourer Concept Meet Mr. Station Wagon.

The crisp, exotic and expensive looking details of the Concept has been replaced by the ordinary, the expected and the mundane. 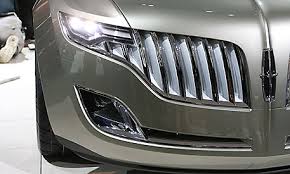 Nothing is more important to long-term branding that a consistently recognizable design element, and none is more prominent on automobiles than the grille. Lincoln has traditionally had two designs: a horizontal egg crate which appeared on the Mark II, Continentals of the early 1960's and the first generation of the MKX/Aviator; A second grille motif uses vertical bars with a peaked center, as seen on all 2012 models as well as the beautiful 69-71 Continental Mark III. 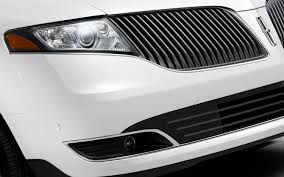 The Concept design has both curved front and rear body fascia, while the production model is more squared off; Headlights which are integrated into the bold Concept grille and remain in the sweep of the front grille now look more like add-ons with parts-bin wraparound turn indicators.

Expensive headlight elements and bold chrome slat grilles centered with an exaggerated crease are replace in production by much cheaper and quite ordinary looking plastic.

The elegant multi-surfaced Chrome Concept Grille is replaced in production by something inspired by a Home Depot HVAC return vent.  Everything below has been eliminated, resulting in the Concept's almost-sinister Cheshire Cat grin morphing into a cow-catcher prow sucking on a harmonica.

A squared off bumper and generic air intake now reside where once was a beautiful s-shaped curved fascia with chromed vents/intakes.

So Grand Tourer Concept morphs into Pretty Ordinary Luxury Station Wagon. But wait - it gets worse. With the retirement of the Town car in 2013, SOMEBODY at Lincoln decided it'd be a good idea to take their luxury MKT wagon and designate IT as the new Livery taxi cab.

If you had just paid north of $50k for your Lincoln Wagon, wouldn't you be just thrilled?...and gods help you if you bought it in black and live near NYC, because you will now be seeing yourself EVERYWHERE.

Will the MKT Taxi be a success for Lincoln? From a sale perspective, Maybe - but that's missing the point. ANY large Ford product would have sufficed as a taxi. Lincoln could have chosen to refresh the existing Town Car exclusively for livery service, or taken GM's new approach and make cars specifically for fleet sales that are not offered in dealerships.


Luxury cars by definition are expensive and exclusive - a taxi cab in neither. 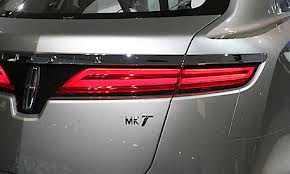 They Can But They Don't: The Unanswered Questions.

The problem at Lincoln doesn't stem from lack of talent. The gorgeous concepts they release proves they CAN create a stunning design AND they have enough maturity within the staff to know what a Lincoln should look like.

The problem with The Lincoln Motor Car Company lies somewhere in Ford's upper management. As much as Alan Mulally can be credited for keeping the company solvent and occasionally profitable, he is admittedly not a car guy. He's been all about cost cutting, efficiency and parts standardization - none of which is good for creating a luxury brand.

The good news is that Mark Fields - who IS a car guy - has been elevated in position and may have a shot at running the entire company soon.

As late as 1969, Lincoln and Cadillac were considered just a notch or two below a Rolls Royce. Saying that today would cause a chuckle, but Cadillac is proving that a luxury brand can be rebuilt and an American car can be considered World Class.

NOW is the time to build the MKT Concept Tourer as originally envisioned. It would also make a beautifully handsome second model sedan by just moving the c-Pillar forward; Lincoln already has a coupe variation completed with the MKR Concept.  But will they do it in time to save the brand from its slide toward irrelevance?

My fingers are crossed that Mark Fields will soon be in a position to deliver - and that he greenlights Lincoln concepts like the MKR "as is" into production. No More Concept Bait & Production Switch. No More Dumbing Down Lincolns Into Mercurys. No More " Lie To Me" Promises from The Lincoln Motor Car Company. It's time to start building Lincolns.

There is no greater disappointment than unfulfilled potential.

Posted by TheClassicCarFactory.com at 12:30 AM No comments: