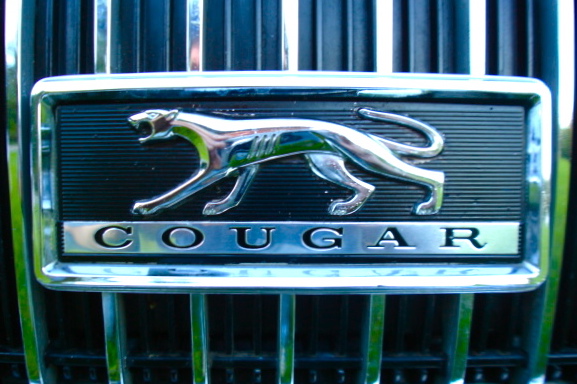 In April 1964, as The NY World's Fair was opening, Ford introduced the Mustang to
America. Designed to be a stylish yet inexpensive personal car, The Mustang sales
were far beyond what anyone had expected. In the first generation which ran through the 1966 model, almost 100,00 were sold per month. Yet despite the several high-performance variations of GT, Fastback and Shelby's, the base Mustang maintained a perception as a
"secretary's car".....sporty? - yes, but luxurious or manly?.....no.

For the 1967 model year, as the Mustang's second generation was being introduced,
Ford adapted the original's styling into a luxury coupe for Mercury by extending the wheelbase 3",,,dubbing it " Cougar - The Man's Car!" and ushering in the slogan
" See Your Lincoln Mercury Dealer - at " The Sign Of The Cat ". 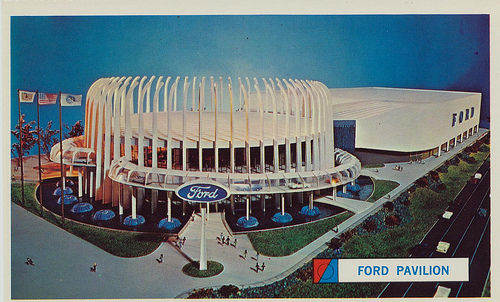 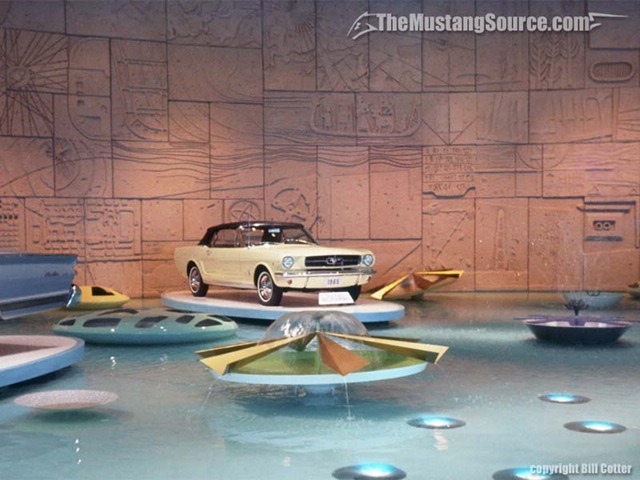 For marketing purposes, The Cougar was intended to be positioned between the Mustang and The Thunderbird. Beautifully styled, The Cougar XR-7 earned Motor Trend's 1967 " Car Of The Year". With a long hood/short deck, a crisp fender peak line from the grille to just behind the door then kicked up in a Coke bottle fashion, end in a declining peak rear fender. Slab siding was accented with mild wheel arches. 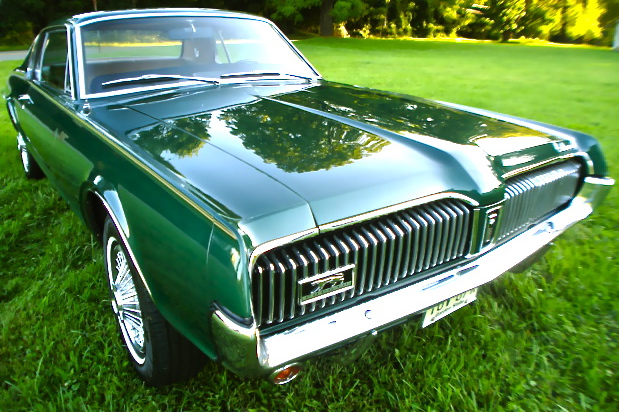 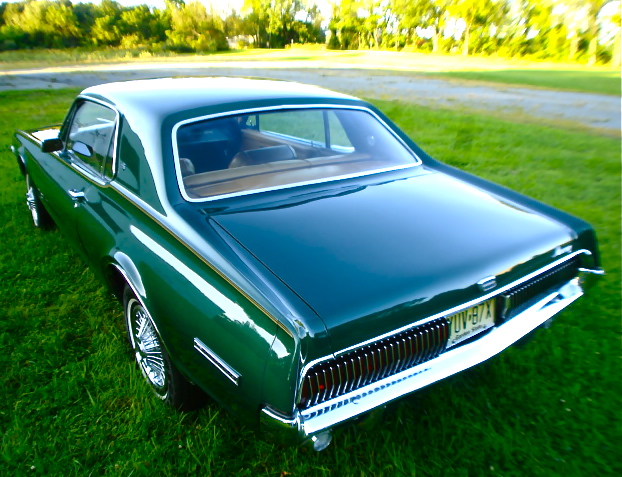 Here are some rare pictures from the Ford Design Studio as the Cougar was taking shape, originally published by Motor Trend Magazine in 1967 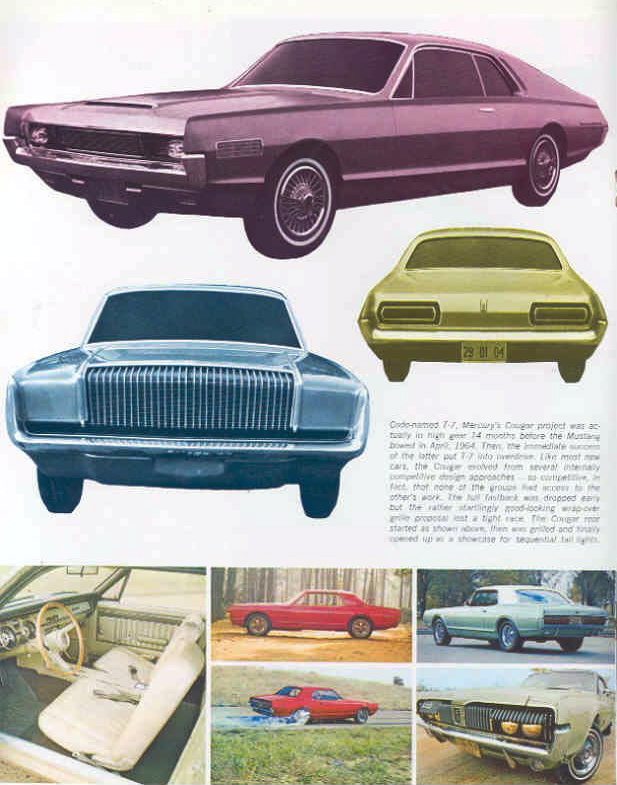 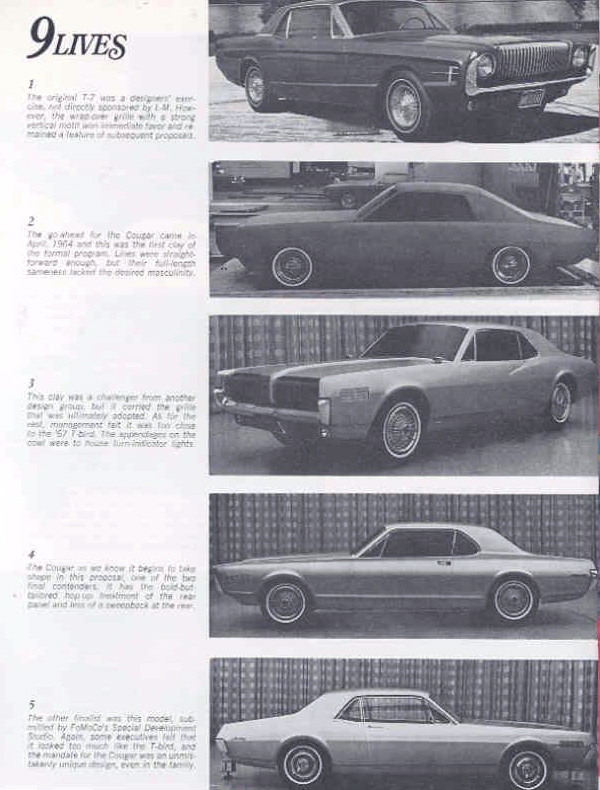 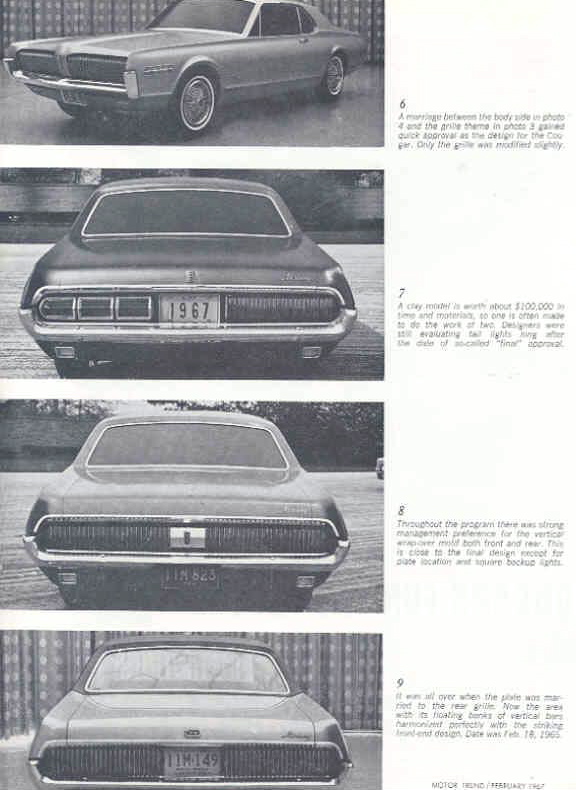 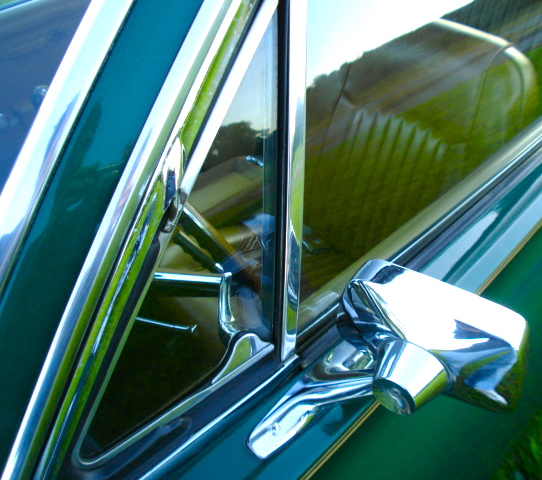 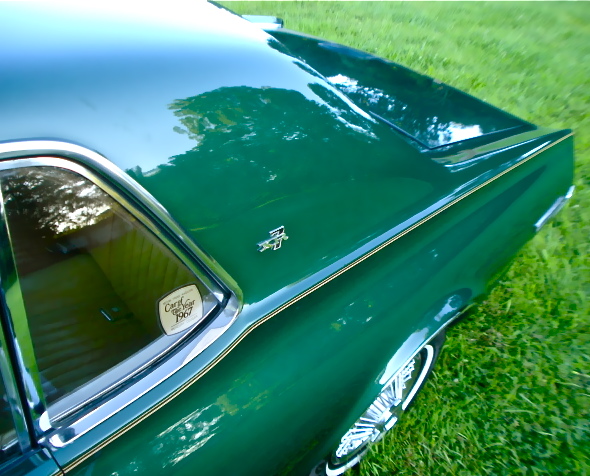 The 1967 Cougar was introduced in one body style, and two trims: The Base Deluxe and The Xr-7. Xr-7 featured a center console with Rallye Clock ( presuming you would be timing your laps?), overhead console check lights for door ajar, low gas, emergency brakes and seat belts not fastened, tone on tone interior upholstery, a simulated wood dash with European-looking gauges and toggle switches for courtesy lights - and for your passenger's entertainment - an oil pressure gauge placed in the front of them. 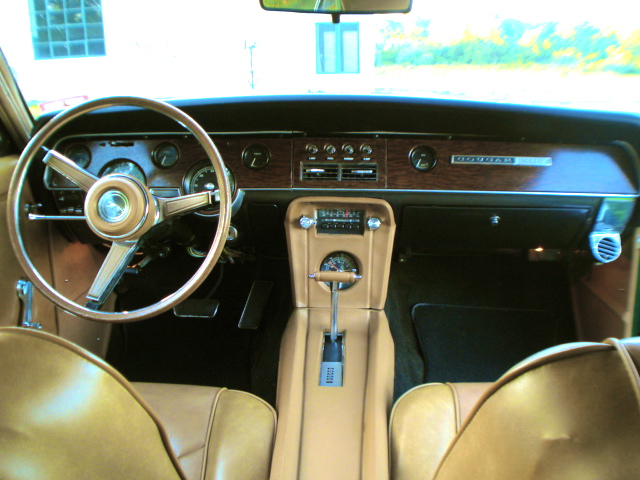 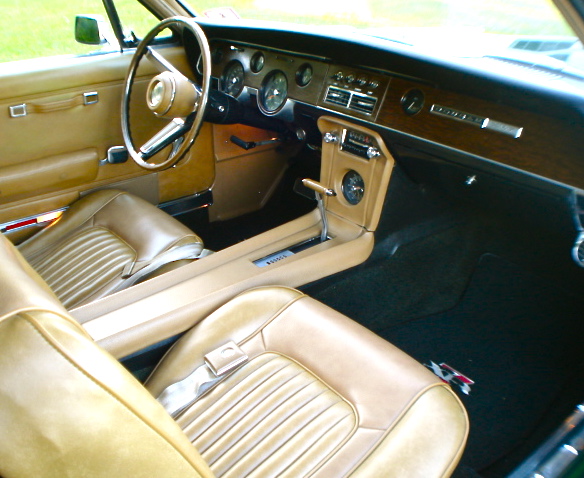 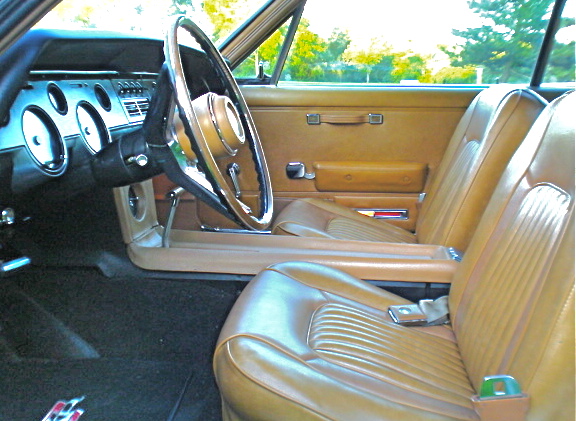 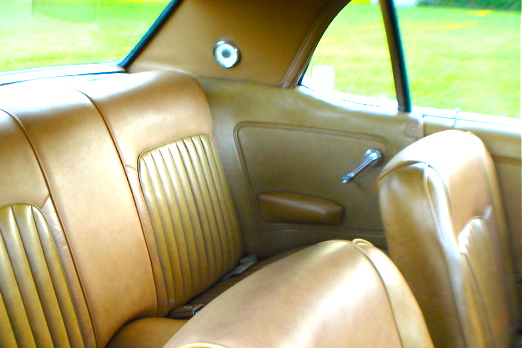 Both Base Deluxe and XR-7 Cougars featured a beautifully crafted waterfall grille with hidden headlights with similarly styled rear tail lights featuring a sequential three blinker mode for turning, as first seen on the Thunderbird in 1964. Specific to the XR-7 exterior was seven vertical bar trim on the rocker panel just ahead of the rear wheels, backup lights and an XR-7 emblem on the c-pillar. 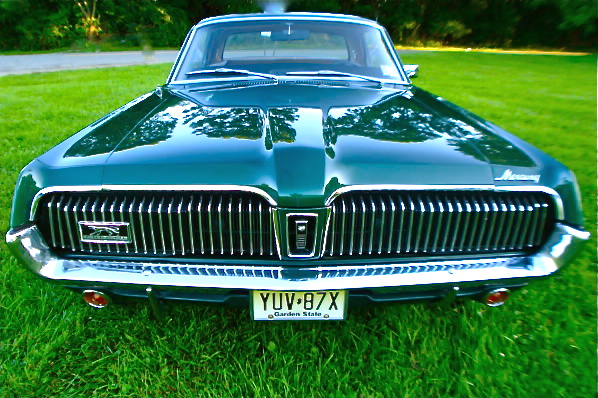 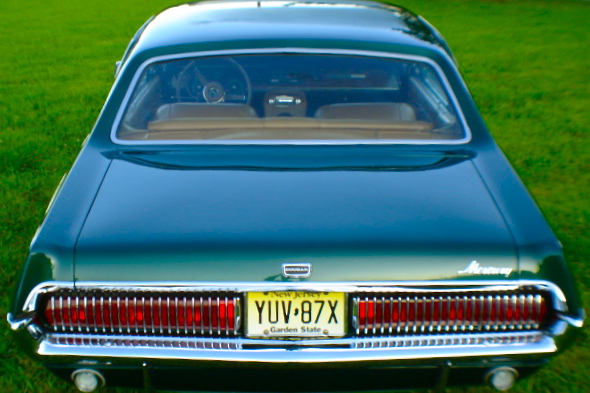 The first generation Cougar would unfortunately last for only 2 years.

For 1968, the beautifully unadorned sides would be marred by mandatory side lights, and vinyl roofs became plentiful, ruining the sweep of the c-pillar. The gorgeous 3 spoke deep dish steering wheel would be replaced by a generic Ford version. 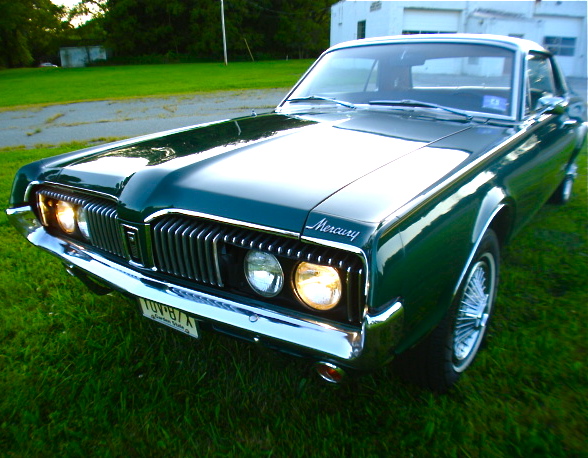 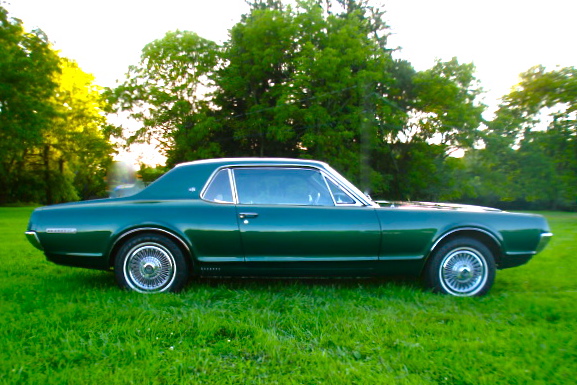 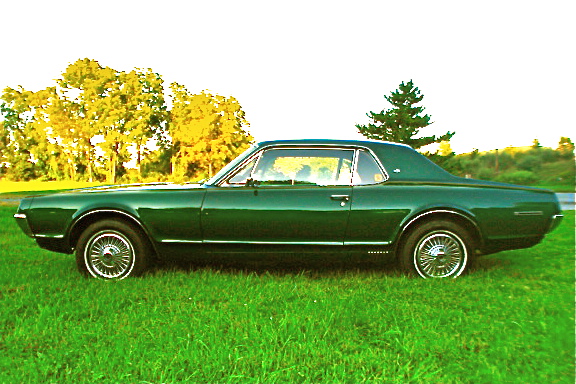 Subsequent years would gradually erode the sporty luxurious styling of the original until the only thing left by 1974 was the name. 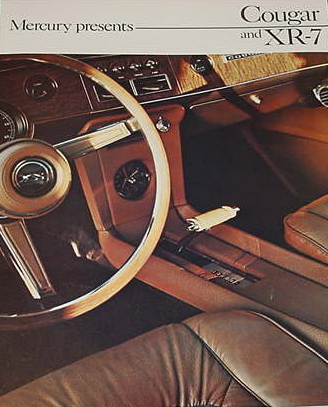 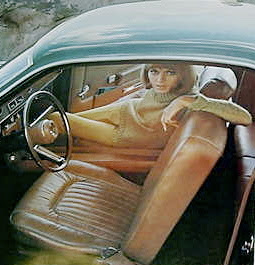 About This Specific Car: " Low Mileage Compared To Space Shuttle"

The photographs above were taken in 2008. This California 1 owner car was purchased in 2006 from the estate of the original owner, who had driven it around Oakland Ca since new for an astonishing 225,000 miles. It had one repaint in the original dark green metallic. The original MSRP is shown below. The XR-7 was sold in 2008 to a new collector in Michigan. 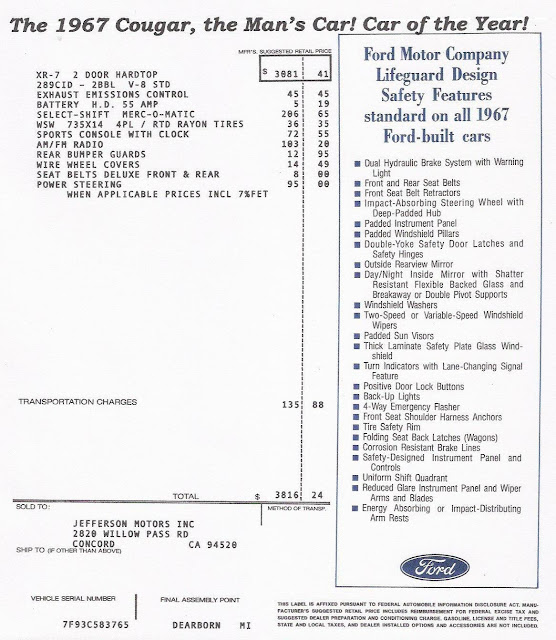 Because the Cougar is essential Mustang/Ford based, mechanical parts
are relatively easy to find, both used and as new reproductions. The XR-7
trim pieces are much harder to find and usually requires restoration of used parts.
The headlights and wipers are vacuum-operated. Always check for rust around the wheel wells, and if originally equipped with a vinyl roof, around the rear window.

The 1967/1968 Cougar is not currently valued anywhere near a Mustang of similar vintage, which is odd given the number of Mustangs produced. The higher horse powered 390 engined cars are beginning to show strength at recent Barrett Jackson and Mecum Auctions.

Posted by TheClassicCarFactory.com at 9:31 PM